Ibrahim Salahi is a prominent Sudanese artist born in 1930. He trained in London and later developed his work by reflecting on his national heritage, more specifically: local architecture, Coptic manuscripts, prayer rugs and other applied arts. He was one of the first artists to include Arabic script in his paintings,thereby combining both Arabic and African to creating a language he considers to be authentically Sudanese.
‘The Inevitable’ seen below came ten years after El Salahi was betrayed by military dictator General Nimieri and imprisoned for six months without trial for conducting anti-governmnet activities. Amidst unimaginable prison condition’s El Salahi would use a sharpened toothbrush as a pencil to sketch secretly in the sand during their 25- min break outdoors once a day. He would take the other 23 hours to think about his Masterpieces, putting together an indestructible  mental sketchbook. 10 years after his release, in 1985, Nimieri was finally overthrown.
This painting was created  as celebration and form of recognition of those that endured suffering under 21 years of horrendous tyrannical rule. Africa’s ‘Guernica’, it is a testimony to war and revolution opposing dictatorship, standing as relevant today as it did at the time. 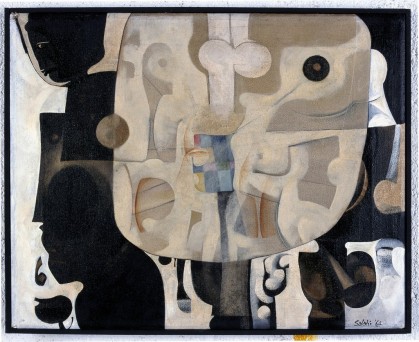